Because people have rushed out to the stores to stock up on everything from canned food to toilet paper to noodles, some shelves have often been empty. One difference I've noticed compared to the US (in general, not during these unusual times) is that restocking in Germany seems to occur throughout the day, not as much overnight. That means there's no guarantee that showing up early in the morning means you'll get everything.

I went to a nearby Lidl (a "discount" grocery store) today, Monday, March 23, 2020 and the shelves were pretty full, especially the fresh produce section. They had even re-organized some shelves to make more room for organic eggs. Why? Your guess is as good as mine.

A little over a week ago, I went to Rewe at Kottbusser Tor (a bigger, more full-service supermarket) on a Monday night (March 16, 2020). This was right around when schools across Berlin announced that they would be closed, and the same evening that Angela Merkel announced Germany-wide measures, including closures of bars, clubs, playgrounds, non-essential businesses, and travel restrictions. Up until that point, many restrictions had been piecemeal due to Germany's federal structure, so individual states had put different measures in place. Obviously people didn't rush out to the store right after the announcement, but it's around the time that if people hadn't noticed changes, they probably would have then.

Things are looking a little sparse at the local grocery store

A few days before that, on Saturday March 14th, 2020, a warm, sunny spring day, I stopped by Aldi (another discount grocery store) and discovered that almost all the fresh produce was almost completely sold out. Stock running low on Saturday evening isn't that unusual in Germany, people tend to freak out right before Sunday since shops aren't open then. Being this empty at 6pm is a little on the extreme side. Mainly the store-brand frozen pizzas were sold out (not the more expensive name brands), unless you happen to love tuna and Hawaiian pizza.

Fresh produce sold out. Aldi brand frozen 🍕 all gone except tuna and Hawaiian varieties. Guess even panic buying can’t even get people to like those. pic.twitter.com/6tVdX5CsLi

Some folks like Fräulein Kimchi + Humble Pie have teamed up to offer weekly delivery of meals (they were a restaurant/caterer and a food truck/caterer before, respectively). They send out their menu and so you can place orders in advance. My neighbor Chung King Noodles is only doing takeaway noodle kits (no pre-orders) for a few hours each afternoon.

There are great lists of local businesses to support, like this one on Stil in Berlin where they break down who you can still order from and other ways to support these businesses. One of the projects in this weekend's #WirvsVirus coronavirus hackathon organized by the German government was put together by Sparkasse Innovation Hub (Sparkassen are local/community banks). They created an easy way for people to donate or buy gift certificates to their favorite shops and stores: explainer video (YouTube, German)

There was a great directory on https://www.supportgastro.com but while I was writing this post, the website changed and only shows a few restaurants in Hamburg. https://helfen.berlin (in German) seems like they're building a platform for local businesses to sell gift certificates but the shop isn't loading right now for me.

Other places seem to have closed for the duration. I hope they're able to re-open when physical distancing measures loosen, but that won't be for many weeks, it seems like.

These photos were taken on March 23, 2020 on Mariannenstraße (Thai Duong and Bar in a Jar): 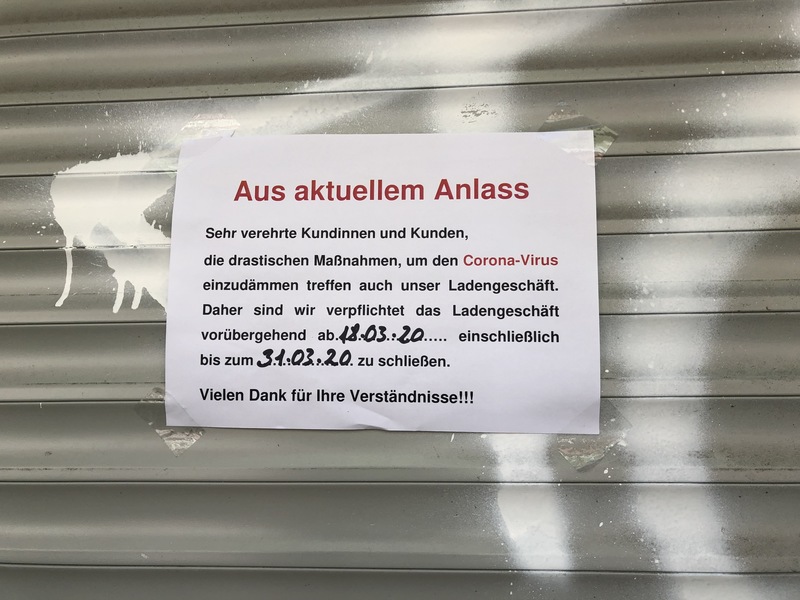 This photo was taken on Saturday March 21, 2020 of Fuks, a bar on Hobrechtstraße in Neukölln. 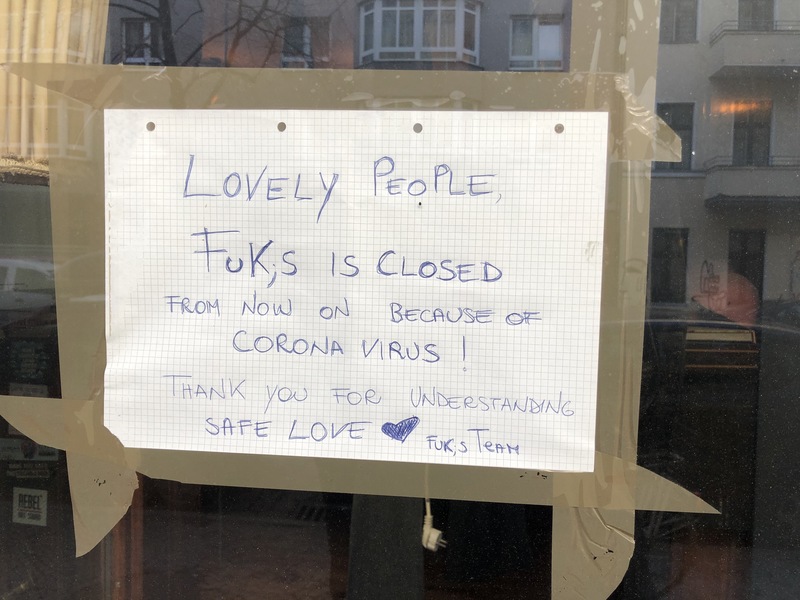