Posts for Tag: my links

This posting my link collection daily is harder than I thought it would be. Instead of clicking "Share on Facebook" now, I keep everything in a text file until I have time to make this blogpost. It shouldn't really take longer, but it does! These were collected May 4 and 5, 2010

"New Jersey Asian Americans live, on average, an astonishing 26 years longer, are 11 times more likely to have a graduate degree, and earn $35,610 more per year than South Dakota Native Americans"

"Somewhere, somehow it was decided that the absolute best of both worlds was to have the United name with the Continental look. It’s not. Financially, strategically and press releasingly, it does make sense, I wouldn’t even venture into thinking that the decision was wrong, but the visual manifestation is like fingernails on chalkboard."

Results from the XKCD Color Survey - fascinating, definitely take a look at this!
"Over 1 in 5 men at Oxford have had gay sex, according to a Cherwell survey of the sexual orientation of over 400 students."
Interesting data, sample size is probably too small though
Things Glee Does Wrong

"There's just one problem—by relying so heavily on Lynch, and Lea Michele's Rachel and Corey Monteith's Finn, and underdeveloping large swaths of its big and talented cast, the show is at risk of making its leads boring and overexposed." 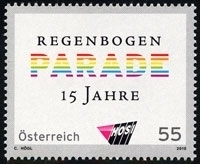 "To our knowledge this is the first time in the world that a postal authority is issuing a special stamp on a gay/lesbian occasion. At least, we are not aware that this has happened before anywhere in the world." via Towleroad

[de] HOSI Wien
Video for Beyoncé's New Single - Why Don't You Love Me
NYT on how medical schools are (some more slowly, some more quickly) adding cost as an additional consideration when teaching medical students how to choose treatments: Teaching Physicians the Price of Care
WaPo: Through oil-fouled water, big government looks better and better

"It may have taken an ecological disaster, but the gulf-state conservatives' newfound respect for the powers and purse of the federal government is a timely reminder for them. As conservatives in Washington complain about excessive federal spending, the ones who would suffer the most from spending cuts are their own constituents." (via Misha)

Worth reading and watching (1)

Instead of posting links and quotes throughout the day, I'm going to try collecting everything into one post. So here's my collection of what I think's worth taking a look at for May 4, 2010.

(collected from yesterday, I suppose. I wish I could see into the future of what'll be floating around today! Then everyone would really have a reason to look at this.)

The New York Times: China, Chinglish, and Fixing Shanghai in Time for the World Expo 2010

Oliver Lutz Radtke, a former German radio reporter who may well be the world’s foremost authority on Chinglish, said he believed that China should embrace the fanciful melding of English and Chinese as the hallmark of a dynamic, living language. As he sees it, Chinglish is an endangered species that deserves preservation.

(For some reason, my first though was, of course it's a German)

The New York Times (again): On the Ending of Bill Moyers Journal

Mr. Moyers has long been a controversial figure. In a column in the May 10 issue of The Nation, the media columnist Eric Alterman called Mr. Moyers the “last unapologetic liberal anywhere in broadcast television.” Conservative critics have long accused Mr. Moyers and his programs of being one-sided.

“To our critics,” he said on Friday’s finale, “I’m glad you paid attention; the second most important thing to journalists is to know we’re not being ignored.” (The only thing more important, he said, is independence.)

(I only recently started listening to the show as a podcast, I've been really enjoying it... sad to see it end.)

Robert Reich: The Rebirth of Regulation

For thirty years, deregulation has been all the rage in Washington. Even where regulations exist, Congress has set such low penalties that disregarding the regulations and risking fines has been treated by firms as a cost of doing business. And for years, enforcement budgets have been slashed, with the result that there are rarely enough inspectors to do the job. The assumption has been markets know best, and when they don’t civil lawsuits and government prosecutions will deter wrongdoing.