What I've Been Reading Post-Prop 8

I just wanted to attempt to track the evolving sources of information and opinion that have been flying across my computer screen this last week. I don't necessarily agree with what's expressed in the articles below, but I think they're worth reading if you haven't seen them already.

There are protests taking place around the country tomorrow (Nov 15, 2008). I'm not sure what the point of them is, but I do think if nothing else it's a good rallying point for lgbt & allied people who are rediscovering their political voices. To find out what's happening near you, check out http://jointheimpact.com 11/5/08 - Dan Savage on "Black Homophobia" (which pissed me off, as Dan Savage does even while he often makes me laugh). Particularly because this blog entry spawned the phenomenon of every anti-Prop 8 blog post leading with a comment about how African-Americans "caused" the passage. 11/7/08 - Facts Belie the Scapegoating of Black People for Proposition 8. Granted, this is a long, detailed, and data-laden piece on the Daily Kos, but it gives concrete reasons why people are fucktards for BLAMING PEOPLE OF COLOR. 11/7/08 - Utah faces boycott after Mormon work for Prop 8 (from Yahoo News) This was the only article I could find just now about the crazy boycotts people are suggesting now of Utah and other things which are not directly related to the elements within the Mormon church who funded the Yes on 8 campaigns. I understand people are looking for a target for their anger, but boycotting a whole state is a little... ridiculous. 11/8/08 - No-on-8's white bias (latimes.com) This piece seems to really annoy white (gay) people, and I'm not sure why, or I don't care why? Something like that. It says a lot about the current fractured (and racist) state of the gay (specifically gay) rights movement. 11/8/08 - Mormon and Catholic churches complain about being the target of Prop 8 protests 11/8/08 - Andrew Sullivan even had some things to point out in a post called Gays, Blacks, Marriage (I'm sure he wrote more, but I'm only linking this one) 11/9/08 - Open Letter to White Activists (which I'm glad someone wrote)11/10/08 - A rough night for gay Obama supporters on Salon.com 11/11/08 - Anti-Gay, Anti-Family is Dan Savage's Op-Ed in the New York Times, which thankfully avoids railing on people of color and instead points out the law in Arkansas which passed, preventing gay people and single people from adopting in Arkansas. He also mentions despicable role of the Mormon Church (Church of Latter Day Saints in funneling funds & volunteers towards the passage of Proposition 8. 11/11/08 - Prop 8 Myths is Nate Silver of fivethirtyeight.com weighing in with his amazing grasp of polling data
(I included dates where I could so you can sort of see the evolution of the discussions)

This is the list of people in Pennsylvania who donated to the anti-gay & homophobic Proposition 8 on the ballot yesterday in California.

There's only 19 donations listed, thank goodness, but if you look more closely, Josephine & John Templeton of Bryn Mawr donated a total of $1.2 million (in five separate contributions) to pass a constitutional amendment that discriminates against same-sex couples in a state on the other side of the country.
The silver lining is that 328 people in Pennsylvania donated to committees opposing Proposition 8, with Merrill Budlong of State College and Suze Orman of Exton topping the list with $10,000 each.
To do your own lookups, check out the San Francisco Chronicle Database. 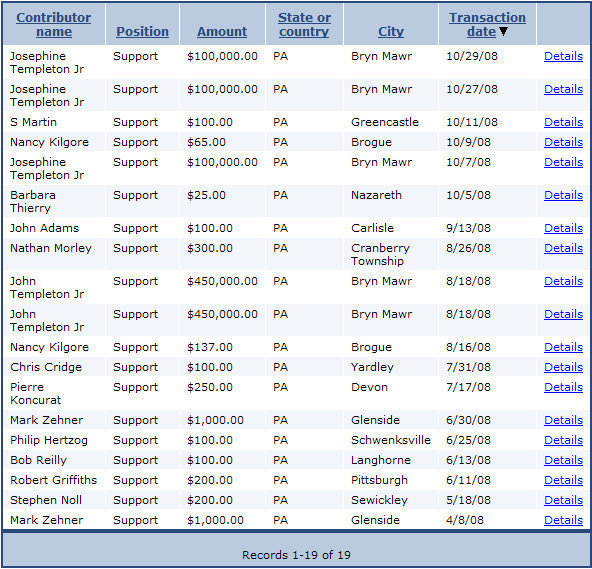 It's a new day

You've Got To Give Them Hope - Harvey Milk

This is an excerpt from Harvey Milk's arguably most famous speech, "You Cannot Live On Hope Alone". I am really looking forward to seeing the movie that's coming out soon. Youtube has the trailer. It takes my breath away each time I watch it. via Charles (on Facebook)

I've been visiting my parents in Michigan since Wednesday night. They're unofficially celebrating their 30th wedding anniversary, though they haven't told most of their friends who are coming to the party tonight. There are some old old friends visiting my parents too, they live in LA & Dallas respectively, and they go all the way back to when my mom was going to nursing school in Taiwan. Pretty amazing that they're still in touch and still good friends, though they sometimes didn't see each other for years (decades!). It's nice to be back home and see the family, but it often makes me wonder that I really ever lived here. The house seems so big compared to my apartment in Philly, the roads are so wide, the people are so white, the buildings so cookie-cutter, the strip malls so common (and boring). Not to mention that there are pretty much McCain signs everywhere. I don't know anything about local and state politics which actually make up the vast majority of the signs on the roads & lawns, but of the presidential candidates' lawn signs, most have been for McCain, including one infuriating "Another Democrat for McCain" sign. Ah well, I suppose McCain/Palin have given up in Michigan, though I haven't looked at any recent polling data. Last night Kim & I met up again for our tradition of sneaking-away-to-a-coffee-shop-while-Powen-is-in-town-for-a-few-days. This time it was at Caribou Coffee... I ended up getting some weirdly named latte with the raspberry flavoring. BIG mistake. It was a sugar-free flavoring and basically made the coffee taste like medicine. The barista, however, was really nice about it and asked if I'd like her to make me something else. Instead, I just got a couple pumps of the almond flavoring which made it palatable enough to drink. Kim & I always have tons of awesomeness to go on about, but the most important thing I got out of our conversation is that melatonin really does help sleep / get over jetlag, and that it won't kill me. So I went to Meijer to get some in preparation for the upcoming transatlantic flight. I took one pill last night just to see what it would do, and it seems innocuous enough, though I have kind of been napping all day (plus I had a crazy gay dream during an afternoon nap). It won't hurt I don't think to try using it to get some sleep on the evening flight tomorrow. Speaking of gayness, this Youtube video is called "Adventists Against Prop 8" is surprising and worth the watch.
My favorite quote:

Jesus was concerned that all people be treated with dignity, and respect, and equality. And therefore, we should vote against Proposition 8 because it reinforces the prejudices that we've had for centuries.

To put them in perspective, I think of being on an airplane. The flight attendant comes down the aisle with her food cart and, eventually, parks it beside my seat. "Can I interest you in the chicken?" she asks. "Or would you prefer the platter of shit with bits of broken glass in it?"


McCain's Celebrity Posse [NBC Bay Area]
Really? Dean Cain, I am so disappointed in you. The rest of them I don't know or don't really care about.